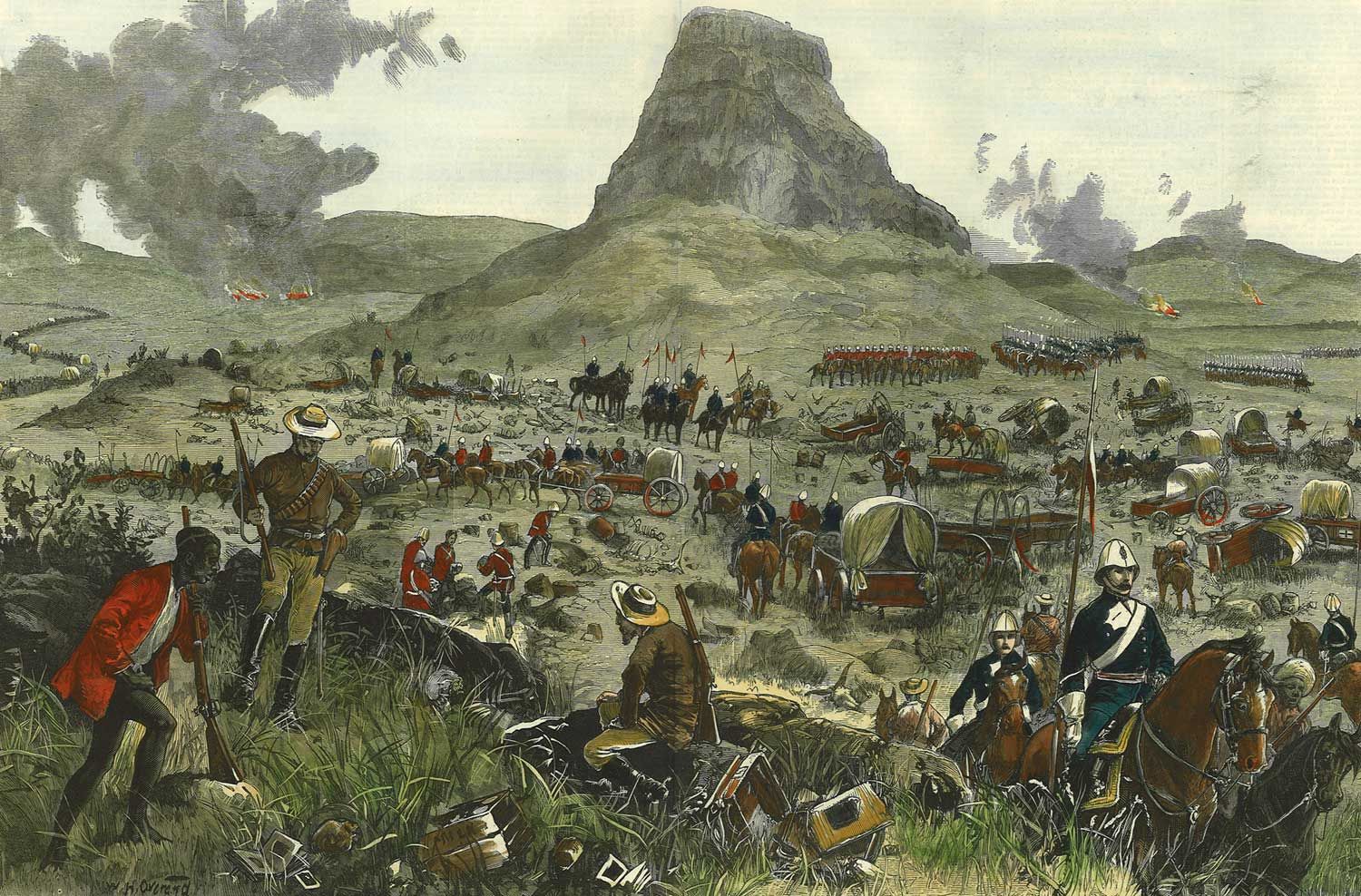 
The proximity of this strange feature adds substantially to the macabre aura that hangs over the Battle of Isandlwana. In the face of the invasion, Cetshwayo mobilised the Zulu armies on a scale not seen before, possibly some 24, warriors. The Centre Column reached Isandlwana on 20 th January and encamped on its lower slopes.

On 21 st January , Major Dartnell led a mounted reconnaissance in the direction of the advance. He encountered the Zulus in strength. Colonel Pulleine was left in camp with the 1 st Battalion of the 24 th Foot. Orders were sent to Colonel Durnford to bring his column up to reinforce the camp. Early on the morning of 22 nd January , Chelmsford advanced with his force and joined Dartnell. The Zulus however had disappeared. The Zulus had bypassed Chelmsford and moved on to Isandlwana. The first indication in the British camp that there was likely to be a Zulu threat, came when parties of Zulus were seen on the hills to the north-east and then to the east.

Colonel Pulleine, the officer in command in the camp, ordered his troops to form to the east, the direction in which the Zulus had appeared. Pulleine dispatched a message to Chelmsford, warning him that the Zulus were threatening the camp. At about 10am, Colonel Durnford arrived at Isandlwana with a party of mounted men and a rocket troop.

Durnford promptly left the camp to follow up the reports of the imminence of the Zulus and Pulleine agreed to support him, if he found himself in difficulties. The remainder of the troops in camp stood down.

One troop of mounted volunteers pursued a party of Zulus as they retired, until suddenly out of a fold in the ground the whole Zulu army appeared. The Zulus were forced to act by the sudden appearance of the mounted volunteers and advanced in some confusion, shaking out as best they could into the traditional form of assault: the left horn, the central chest of the attack and the right horn.

Pulleine had just received a message from Chelmsford, ordering him to break camp and move up to join the rest of the column. It is thought that neither Pulleine, nor any of his officers, appreciated the scope of the threat from the Zulus or the size of the force that was descending on them. Pulleine acted as if the only need was to support Durnford. On the British right, the companies of the 24 th and the NNI were unable to prevent this envelopment. In addition, the Zulus were able to infiltrate between the companies of British foot and the irregulars commanded by Durnford.

It is said that a major problem for the British was lack of ammunition and failings in the system of re-supply. It seems that this was not so for the 24 th. He chose not to do so, leaving a much less experienced man in charge.

When the attack came, it came quickly. The minute the encampment at Ngwebeni was discovered by British scouts, the entire Zulu army sprang into action. Word reached Pulleine that a large Zulu force was approaching fast and in huge numbers.


Pulleine sent all six companies of the 24th Foot out to engage the central Zulu column head-on. At first, the extended British firing line held the attack off with considerable ease with help from the two mountain guns of the Royal Artillery. The legendary Martini-Henry breech-loading rifle was more than a match for an attacking force armed with spears and clubs, and with a firing rate of twelve rounds per minute, the experienced soldiers of the 24th Foot were able to hold the central column of the Impi at bay, inflicting heavy casualties on the Zulu side, forcing many to retreat behind Isandlwana hill to shelter from the hail of shells and bullets.

Unfortunately for the soldiers holding the line against the Zulu central column, the horns of the impi began to make headway against less experienced opposition.

Durnford, defending the British right flank, had already lost his rocket battery and was now haemorrhaging troops. Realising he could no longer hold the line against the central and left-hand columns of the impi, Pulleine ordered a fighting retreat back to camp.

This was done in an orderly fashion by the stout regulars of the 24th. As the remaining troops fell back to the camp, the skies above them darkened. A solar eclipse occurred at that day, turning the skies black for several minutes. Although they faced a force of roughly 20, Zulu warriors, the British felt assured of their victory due to superior military resources. By the end of the battle the British had lost around 1, of their force of 1, while the Zulus suffered a relatively light loss of around 1, men.

In order to preserve the Imperial image of power and prestige and to avoid the Zulu victory inspiring other nations to revolt against British colonial rule, they launched a nine-month counteroffensive that would engage at least 17, British troops, the largest Army they sent to Africa.

Britain would emerge victorious in this Anglo-Zulu War after their forces captured Cetshwayo on August 28, , forcing him to agree to the dismantling of the Zulu Empire into 13 small states. Eight years later, on May 9, , all of these states were annexed by the British. The Battle of Isandlwana, however, would remain an important landmark in the history of Africa as an example of defiance against European Imperialism.